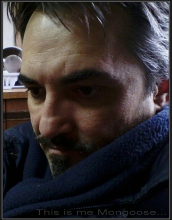 Has an informal education in fine arts (Art workshop of Sladjana Merković, painter in Belgrade, ,,Šumatovačka" workshop of fine arts).

Once had an individuall exibition in Gallery of Cultural centre of Šabac (Serbia).
In his country was several times praised and once awarded.

After a ten years of creative abstinence and self-questioning, has started over again study and work in traditional easel painting.

Subject of his interest is predominantly portrait and still life painted in manner of renaissance master.
more >
3