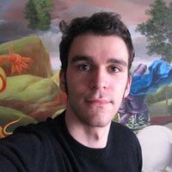 Although my works are diverse in regard to concept and media, I am mainly a painter.

The central motif of my works is human body. My depiction of it is derived from various understandings of society, human relationships and mentality. Dubravka Ugrešić, a post Yugoslav writer wrote in one of her essays that all of the utopian concepts are broken - the smaller ones are still alive, but with fatigue syndrome; market of concepts is in a collapse; financial markets insecure; neither pensions provide a secure future, nor future will provide pensions; labor laws alter to diminish the rights of working class, while unemployment grows. She concludes that our (and somebody else's) body remains the last stronghold. Body is the room for our personal freedom, our control and manipulation, our pleasures and our future. Supporting our self-confidence, the ideology of mass-consumerism successfully convinces us to believe so.


Bearing in mind that I was growing up in a region that witnessed war as well
as serious social, economic and moral crisis, an individual sized by strong emotions, unable to accomplish themselves, is often in the focus of my interest. Even more, I am interested in the concepts that more or less directly refer to renewal of life – eroticism, motherhood, fertility, sexuality. During the times of turbulent and unpredictable social changes or even disasters, their understanding is always examined.

The presented images bring together painting and photography. At first glance the clearly recognizable surreal style calls to mind the practice of modern masters like Dali, Henry Moore or Picasso. Yet, these paintings are digitally transformed photographs and collages reproduced in technique of oil on canvas.

The photographed people I know in person. A cold eye of camera lens penetrates their intimate space exploring their individuality, their relationships and emotional realm. Depiction of the intimate moments refers to blurred lines between the personal and public in today's media shaped society. The expression of sexuality has been often regarded as an act of free spirit, rebellion against taboo or even a revolution. In these images sexuality is their compensation. The turbulent compositions place the human characters in a claustrophobic room where their intimacy is rather the escapism from sad reality than manifestation of close relationship or true love. The couples remain mentally and emotionally distant in spite of their physical contact. The alienation and loss of personal freedom in contemporary society is in the focus of my interest.

Visual distortions of human figures create a plenty of hybrid, stylized forms- some of them may remind us on an egg, an embryo or a snake. Such motifs broaden the initial idea and reflect my very personal passion for symbolism. The possible context of certain motifs tends to surprise, offering various ways of understanding the work.

2006. Graduated at the Faculty of Fine Arts, University of Arts, Belgrade.