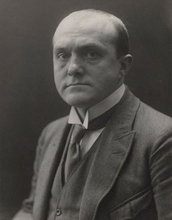 Max Beckmann was one of the most foremost German artists of the twentieth century. A solitary and independent-minded man, he developed an expressionistic style with a completely personal language far removed from any of the trends to which his contemporaries subscribed.

After studying from 1900 to 1903 at the Kunstschule in Weimar, an academy that advocated plein air painting, Beckmann lived in France for a year under the wing of the German historian Julius Meier Graefe. In the French capital he came into contact with the work of the Impressionists and discovered Cézanne and Van Gogh. From 1904 to the First World War he lived in Berlin, where he married his first wife, Minna Tube, joined the Berliner Sezession and staged numerous exhibitions. He enlisted voluntarily to serve in the First World War but had to abandon the battlefield owing to a nervous breakdown. The war sharpened his scepticism and disillusionment, and his style of painting became more dramatic. In 1917 he settled in Frankfurt, where he taught at the Städelsches Kunstinstitut years later. During the 1920s he painted many portraits and self-portraits, figurative themes, landscapes and still-life scenes.

In 1925 Beckmann’s work was shown at the Frankfurt Kunstverein, at Paul Cassirer’s prestigious Berlin gallery, and in the Neue Sachlichkeit (New Objectivity) exhibition in Mannheim. That year he married Mathilde von Kaulbach, whose pet name was Quappi, and she became the main subject of his works thereafter. In 1928 Gustav F. Hartlaub organised an important retrospective of his work at the Kunsthalle Mannheim, while his fame continued to spread. In 1930 he opened a studio in Paris, where he spent long periods, though he was never particularly in tune with the Paris art world. The arrival of Nazism marked a turning point in his life and cut short his rise to fame. In 1937, the day after the opening of the Entartete Kunst (Degenerate Art) exhibition showing several of his works, he decided to leave Germany and for some years divided his time between Paris and Amsterdam. In the Dutch city, where he sought refuge during the Second World War, he produced important series of graphic works, prominent among which are the lithographs of the Apocalypse, which reflect his personal vision of Europe’s situation. In 1948 he went to live in the United States and taught in Saint Louis and also in New York, the city in which he died without having returned to his country of birth.