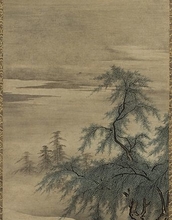 Kanō Masanobu (狩野 正信, 1434? – August 2, 1530?, Kyoto) was a Japanese painter. He was the chief painter of the Ashikaga shogunate and is generally considered the founder of the Kanō school of painting. Kano Masanobu specialized in Zen paintings as well as elaborate paintings of Buddhist deities and Bodhisattvas.

Masanobu's father had been a samurai and amateur artist named Kanō Kagenobu. Masanobu would start the line of professional artists of the family. As an artist Masanobu, like many in his day, was influenced by the priest-painter Tenshō Shūbun, and some sources indicate that he may have received the bulk of his artistic education under Shubun. Masanobu worked in the suiboku style, derived from Chinese painting, but added a Japanese touch to the style with more defined forms. Very few of his works survive with Zhou Maoshu Appreciating Lotuses being an exception.

Kanō Masanobu would serve the Muromachi government as an official painter (御用絵師, goyō eshi), succeeding Sōtan to the post. Although Masanobu's father was samurai the family was provincial and therefore he did not have rank at court. Instead of rank he had gained his position in service due to a mix of achievement and social capital. This led to some criticism as aristocrat Shūzan Tōki expressed disdain toward Masanobu stating he was not a "born court painter."

As a style of painting the Kanō school would maintain dominance over 400 years from Masanobu's time up through the Meiji Restoration (1868). That stated the school's style is neither purely nor mainly Masanobu's legacy as the distinct Kanō style is linked more to Masanobu's son Kanō Motonobu who took over as head of the school after Masanobu.
more >
1