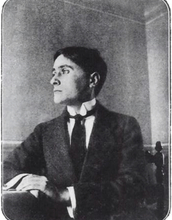 Jean Dominique Antony Metzinger ( June 24, 1883 – November 3, 1956) was a major 20th-century French painter, theorist, writer, critic and poet, who along with Albert Gleizes, developed the theoretical foundations of Cubism. His earliest works, from 1900 to 1904, were influenced by the Neo-impressionism of Georges Seurat and Henri-Edmond Cross. Between 1904 and 1907 Metzinger worked in the Divisionist and Fauvist styles with a strong Cézannian component, leading to some of the first proto-Cubist works.

From 1908 Metzinger experimented with the faceting of form, a style that would soon become known as Cubism. His early involvement in Cubism saw him both as an influential artist and principal theorist of the movement. The idea of moving around an object in order to see it from different view-points is treated, for the first time, in Metzinger's Note sur la Peinture, published in 1910. Before the emergence of Cubism, painters worked from the limiting factor of a single view-point. Metzinger, for the first time, in Note sur la peinture, enunciated the interest in representing objects as remembered from successive and subjective experiences within the context of both space and time. Jean Metzinger and Albert Gleizes wrote the first major treatise on Cubism in 1912, entitled Du "Cubisme". Metzinger was a founding member of the Section d'Or group of artists.

Metzinger was at the center of Cubism both because of his participation and identification of the movement when it first emerged, because of his role as intermediary among the Bateau-Lavoir group and the Section d'Or Cubists, and above all because of his artistic personality. During the First World War Metzinger furthered his role as a leading Cubist with his co-founding of the second phase of the movement, referred to as Crystal Cubism. He recognized the importance of mathematics in art, through a radical geometrization of form as an underlying architectural basis for his wartime compositions. The establishing of the basis of this new perspective, and the principles upon which an essentially non-representational art could be built, led to La Peinture et ses lois (Painting and its Laws), written by Albert Gleizes in 1922–23. As post-war reconstruction began, a series of exhibitions at Léonce Rosenberg's Galerie de L'Effort Moderne were to highlight order and allegiance to the aesthetically pure. The collective phenomenon of Cubism—now in its advanced revisionist form—became part of a widely discussed development in French culture, with Metzinger at its helm. Crystal Cubism was the culmination of a continuous narrowing of scope in the name of a return to order; based upon the observation of the artists relation to nature, rather than on the nature of reality itself. In terms of the separation of culture and life, this period emerges as the most important in the history of Modernism. [source]
more >
14