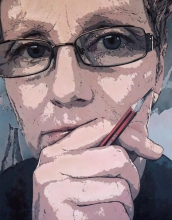 Jana was born in Czechoslovakia now Czech Republic. She finishing five years of study and graduated as an Interior designer.
In 1981 she immigrated to Western Australia, Perth, and immediately became involved in art.
Jana lives and works in Perth from her Studio 24 Yampi Way, Willetton and display her work in her gallery: Metamorphosis Art Gallery, 16 Yampi Way, Willetton.
Throughout the years Jana has been part of countless group exhibitions, competitions and awards.
First solo exhibition in Australia was held in 1987. The same year her work was selected as a finalist at Matilda Bay Art Award.
In 1988 she won first prize in pastel category in both the City of Melville Art Award and the Bicentennial Art Exhibition in York.
In 1989 Jana held a second solo exhibition of pastel paintings in Gomboc Gallery.
In 2005 she held a solo exhibition at Atwell Gallery.
In 2006 Jana won the oil category of The City of Canning Art Award and was a finalist in The Shirley Hannan National Portrait Award.
In 2006 Jana won The Peoples Choice Award with portrait of Peter Kennedy in Black Swan portraiture prize. The same year she held a solo exhibition “Life, death and in between” at St. John of God Hospital in Subiaco.
In 2008 Jana held a solo exhibition at Linton and Kay Fine Art Gallery.
In April 2009 Jana started a year’s sabbatical painting in Italy, where she held a solo exhibition in Arezzo, and later in that year several group exhibitions in Sondrio,
In May 2010 her paintings featured in the “Out From Down Under and Beyond” exhibition in Agora Gallery, Chelsea, New York.
In November 2010 Jana held a solo exhibition “Love affair with Italy” in Fremantle, Perth.
2015 marked Jana’s fifth finalist selection for the prestigious Black Swan portraiture prize.
Jana is a regular contributor to Doug Moran, Archibald and Black Swan portraiture competitions.
Her project “Permanent Impressions” is a collection of portraits acknowledging the outstanding contribution of 50 West Australia women to our society. “Permanent Impressions” travelled throughout regional Western Australia during 2013/2014, receiving great acclaim and enthusiastic attendance from thousands of Western Australians. This project is immortalised in the award-winning book entitled “Permanent Impressions – a celebration of women”. We are proud to report that the book won the Bronze medal in the Best Regional Non-fiction category for the 2014 Independent Publisher Book Awards in New York.
In 2013 Belmont Business Enterprise Centre presented Jana with the “Most creative award” in its small business category.
In 2014 Jana launched the Contemporary Australian Surrealists movement. The movement held four group exhibitions of its members in 2014, 2015 and 2016. In 2017 the group exhibited in Cambridge Studio Gallery in Melbourne.
In 2016 Jana was featured in the TV series Colour in Your Life presented by Graeme Stevenson.
Jana’s work can be divided into three categories: Fantastic realism, Portraits and Visual dairies (paintings from her extensive travels).
She is a member of WA portrait group and participated in three collective exhibitions in January 2015, 2016 and 2017.
Jana was a finalist in Paintings for a Couse Calendar competition in 2016 and winner in 2017.
She has been finalist in Pro Hart Outback Art Prize in 2017 as well as finalist of RSASA/SALA Portrait Prize.
In 2017 she was featured in the book “Extra ordinary Business women” as well as “Perth Artists”.
She was a winner of 2017 Black Swan Prize for Portraiture winning $50,000 Lester Group Prize.
Jana teaches, educates and demonstrates her skills to many art groups and social groups. Since 2009 she takes art lovers every year for cultural art tours to different places around the globe. Among some of the destinations are Italy, Czech Republic, South Africa. NZ, Canada, Switzerland and Austria.
more >
9