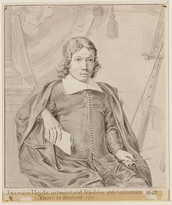 Jan van der Heyden (5 March 1637, Gorinchem – 28 March 1712, Amsterdam) was a Dutch Baroque-era painter, glass painter, draughtsman and printmaker. Van der Heyden was one of the first Dutch painters to specialize in townscapes and became one of the leading architectural painters of the Dutch Golden Age. He painted a number of still lifes in the beginning and at the end of his career.

Jan van der Heyden was also an engineer and inventor who made significant contributions to contemporary firefighting technology. Together with his brother Nicolaes, who was a hydraulic engineer, he invented an improvement of the fire hose in 1672,.[2] He modified the manual fire engine, reorganised the volunteer fire brigade (1685) and wrote and illustrated the first firefighting manual (Brandspuiten-boek). A comprehensive street lighting scheme for Amsterdam, designed and implemented by van der Heyden, remained in operation from 1669 until 1840 and was adopted as a model by many other towns and abroad.