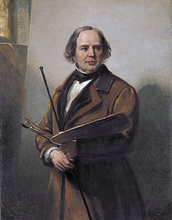 Jan Willem Pieneman (1779-1853)
Born in Abcoude in 1779, Jan Willem Pieneman studied at Amsterdam’s Stadstekenacademie. In 1805, he was appointed to teach drawing at the artillery and engineering college in Amersfoort. Pieneman was known above all for his depictions of events in Dutch history. He also served in various administrative positions: in 1820 he became the first director of Amsterdam’s Royal Academy of Fine Arts and from 1844 to 1847 he was director of the Rijksmuseum, then still housed in Trippenhuis. Pieneman also helped organise and teach of a group of young students, including Jozef Israëls.
more >
1