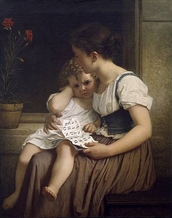 Hugues Merle (1823–1881) was a French painter who mostly depicted sentimental or moral subjects. He has often been compared with William-Adolphe Bouguereau.

Biography[edit]
Hugues Merle was born in 1823 in Saint Martin. He studied painting with Léon Cogniet. Merle started exhibiting at the Salon (Paris) in 1847. He received second class prizes in 1861 and 1863.[1] In 1866 he was made Chevalier of the Legion of Honor.

Hugues Merle became a friend of Paul Durand-Ruel in the early 1860s. Durand-Ruel had started buying paintings by Merle in 1862 and introduced the artist to painter William-Adolphe Bouguereau.[2] Merle was later often compared to Bouguereau and “became a considerable rival of Bouguereau in subject and treatment”.[3] In the mid-1860s, Merle painted several portraits of Paul Durand-Ruel, his wife, and their son, John.