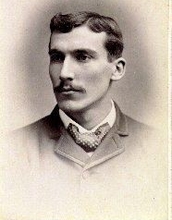 Henry Golden Dearth (22 April 1864 – 27 March 1918) was a distinguished American painter who studied in Paris and continued to spend his summers in France painting in the Normandy region. He would return to New York in winter, and became known for his moody paintings of the Long Island area. Around 1912, Dearth changed his artistic style, and began to include portrait and still life pieces as well as his paintings of rock pools created mainly in Brittany.

At the age of 15, his family moved to Waterbury, Connecticut, where he entered the employ of Brown & Brothers, and was afterward for a time connected with the Waterbury Clock company. Dearth's passionate love for art led him to eventually devote himself solely to the study of painting. He entered the studio of portrait painter Horace Johnson for three months before he went to Paris and studied in the atelier of Ernest Hébert and Aimé Morot at L’Ecole des Beaux Arts.

Dearth became a member of the Society of American Artists in 1888 and was elected to full Academician in 1906 when the National Academy and the Society merged. He was also a member of the Fencers Club, Lotos Club, and the Century Association. He won the Society of American Artists' Webb prize in 1893. He also won a bronze medal at the Exposition Universal in Paris (1900) and silver medals at the Pan-American Exposition in Buffalo (1901) and at an exhibition in Buenos Aires (1907).
more >
2