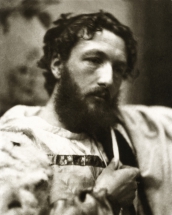 He did succeed in becoming 'eminent in art' with Queen Victoria buying his first painting in 1855 and in 1878 he reached the pinnacle of his profession, becoming the President of the Royal Academy of Arts. He never married and just before his death from heart failure in 1896, he was ennobled, becoming Frederic, Lord Leighton, Baron of Stretton. He is the only British artist to have been awarded this honour and is buried in St Paul's Cathedral.
more >
33