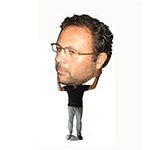 I am called Giannis Drakos (DRANIS) I was born in Patras fourty five years ago.

I live in Patras until today.
I was educated to the structural school (and I worked in this field in Patras for nine years). I also worked as a free designer and typist.
I have been illustrating books with sketches since 1991.