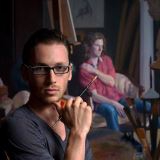 Daniel Bilmes is an artist in the figurative genre, whose paintings are noted for their elegance, refinement and serene humanism. He is the recipient of of the grand prize in the 3rd "Utrecht/ American Artist Magazine competition", and the portrait merit award in this year's "Salon International".

Daniel’s work has been influenced by such masters as Rafael, Repin and Rembrandt, but the artist he most admires is his father and teacher, Semyon Bilmes. Daniel began his artistic education at the age of eight under Semyon’s tutelage. His schooling is deeply rooted in classic 19th century Russian painting tradition, and his style inspired by his multi-cultural upbringing and international travels. At the age of 15 he became an instructor at the Ashland Academy of Art in Southern Oregon.

Daniel went on to cofound Atelier Maui with his father, where he taught for 2 years before moving to LA.

His work aims to capture the character of his subject in the most sensitive and truthful way possible. He achieves this by digging ever deeper into the human experience, looking for hidden insights, bringing them into significance and onto the canvas.

In addition to numerous and varied ongoing projects, Daniel teaches at the Los Angeles Academy of Figurative Art.
more >
26