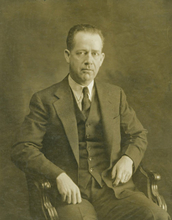 Charles Ephraim Burchfield (1893-1967) was an American painter, best known for his watercolor landscapes. Burchfield was born April 9, 1893, in Ashtabula Harbor, Ohio. Five years later, his family moved to Salem, Ohio, where he graduated from high school as class valedictorian in 1911. He attended the Cleveland School of Art from 1912-1916 and studied with Henry G. Keller, Frank N. Wilcox, and William J. Eastman.

In 1921, Burchfield moved to Buffalo, New York, to work as a designer for the prominent wallpaper company, M.H. Birge & Sons Company. The next year he married Bertha Kenreich, with whom he raised five children. Fascinated by Buffalo's streets, harbor, railroad yards, and surrounding countryside, he adopted a more realistic artistic style. Burchfield's foray into realism lasted for several years.

He became friends with Edward Hopper in 1928, after Hopper’s essay on Burchfield appeared in the July issue of Arts magazine. Hopper wrote, "The work of Charles Burchfield is most decidedly founded, not on art, but on life, and the life that he knows and loves best.”

In 1929, the Frank K. M. Rehn Galleries in New York City began representing Burchfield, allowing the artist to resign from his job as a designer to paint full-time. During this period, his works show optimism and an appreciation of American life. In 1930, his work was the subject of the Museum of Modern Art in New York’s first one-person exhibition, Charles Burchfield: Early Watercolors 1916-1918. He was included in the Carnegie Institute’s The 1935 International Exhibition of Paintings, in which his painting The Shed in the Swamp (1933-34) was awarded second prize. In December 1936 Life magazine declared him one of America’s ten greatest painters in its article Burchfield’s America.

In the 1940s, Burchfield returned to ideas begun in early fantasy scenes that he often expanded into transcendental landscapes. Burchfield, always probing the mysteries of nature in an attempt to reveal his inner emotions, once stated, "An artist must paint not what he sees in nature, but what is there. To do so he must invent symbols, which, if properly used, make his work seem even more real than what is in front of him." He followed this artistic vision until the end of his life, creating some of his most mystical works.

Burchfield’s artistic achievement was honored with the creation of the Charles Burchfield Center at Buffalo State College on December 9, 1966, a month before his death on January 11, 1967. Today, the Burchfield Penney Art Center stands as a testament to the art and vision of Charles Burchfield and the artists of Western New York State, and the museum holds the largest public collection of works by Burchfield as well as more than 70 volumes of handwritten journals, 25,000 drawings and other ephemera including a scale re-creation of the artist’s Gardenville, New York studio.