Romanticism is the 19th century movement that developed in Europe in response to the Industrial Revolution and the disillusionment of the Enlightenment values of reason. The movement was characterised by the emphasis on emotion and imagination as well as the glorification of nature with its irrational forces. Whereas Neoclassicism praised the return to the classical beauty and the perfection of the ancient world, Romantic artists preferred to revive medievalism. Romanticism derived from the German Sturm und Drang movement and from the ideology of the French Revolution. Values such as freedom, imagination, individual expression and irrationality are all main characteristics of Romanticism that first started to appear in portraiture, highlighting the individual and subjective world of the artist. 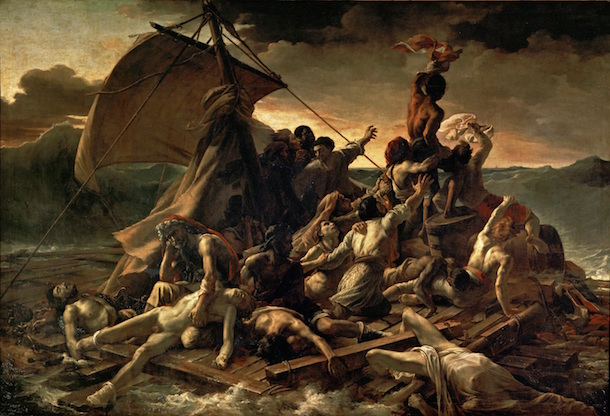 Apart from the focus to the individual, romantic art also features nature, and mostly its darkest expressions. Nature does not remind us of the quiet, harmonic and rational images of the Enlightenment and Neoclassicism, but it is an uncontrollable and unpredictable force that awakens in the artist the sense of Sublime. As the British statesman Edmund Burke declared in 1757 "all that stuns the soul, all that imprints a feeling of terror, leads to the sublime." This feeling is central in English and French paintings of the late eighteenth and early nineteenth century. Romantic artists sought to depict this sense of displacement and defeat against such an immense strength through the images of shipwrecks and evocative landscapes.

Romanticism was an artistic movement that embraced literature, painting, music, architecture, criticism and history and that spread all around Europe in the 19th century. Discover more about Romanticism in the History of Romanticism.